On October 5, Jersey Mike’s Subs nationwide will be in the pink and ready to celebrate “Mike’s Way to a Cure Day” benefiting Susan G. Komen for the Cure®.  The date was chosen as the start to the final month of the “Mike’s Way to a Cure®” six-month fundraising and awareness-building campaign, which falls in Breast Cancer Awareness Month.  On that day, Jersey Mike’s restaurants throughout the country will donate a portion of proceeds to the cause, see below for individual market information).

“Virtually everyone has been touched by breast cancer in some way, and there is still so much we can collectively do to help hard-working organizations like Susan G. Komen fund research and find a cure,” said Peter Cancro, Jersey Mike’s Founder and CEO.  “The response from our customers has been outstanding – they have shared their stories and supported our efforts on many levels – and it looks like this will be our biggest fundraiser ever.”

The multi-faceted “Mike’s Way to a Cure” initiative began in May and Jersey Mike’s locations throughout the nation have been raising funds and awareness for breast cancer ever since in many different ways:

“Jersey Mike’s partnership creates much needed awareness for breast cancer through their restaurants around the country, while raising funds for life-saving national research and educational programs,” said Margo K. Lucero, vice president of business development & partnerships Susan G. Komen for the Cure.  “We’re delighted to partner with an organization known for giving back to its communities.”

This has been a year of milestones for the popular East Coast-style sub franchise, which is celebrating its 55th Anniversary this year.  In March, the company raised more than $600,000 for 66 local charities during its Month of Giving campaign.  “Giving – making a difference in someone’s life” has been a founding principle of the company from the very beginning.  In October, the company will open its 500th location as well as in its 30th state:  Louisiana.

Jersey Mike’s, a sub sandwich franchise with more than 500 stores open and under development nationwide, has a long history of community involvement and support. Started at the Jersey Shore in 1956, Jersey Mike’s serves authentic East Coast-style subs on fresh baked bread – the same recipe it started with over 50 years ago.  The company’s mission is to bring its customers the highest quality, freshest made sub in the industry and give back to the communities in which it operates. A store locator and franchise information for Jersey Mike’s can be found at www.jerseymikes.com.

About Susan G. Komen for the Cure® 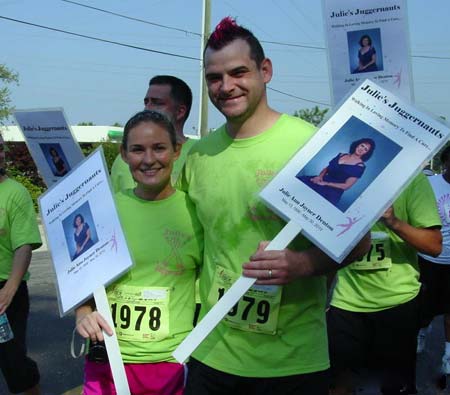 Marcus Sledge, a corporate manager for Jersey Mike’s Subs in Raleigh, and his wife, Anna Marie, began participating in the Susan G. Komen Race for the Cure more than a decade ago to help raise money for a great cause.  Soon, however, the cause became personal when Marcus’ aunt, Julie Denton, was diagnosed with breast cancer.

“When someone has cancer you feel useless,” said Marcus.  “This is our way to do something to help.”

That year, Marcus pushed his aunt, who was in treatment, nearly the entre way in a wheelchair although she walked by herself at the end to cross the finish line.

Last year, after seven years of battling numerous cancers, and two weeks before the race, Julie passed away.  Sporting a pink Mohawk as he promised his aunt he would, Marcus and Anna Marie participated in her honor.

“This is a really personal thing for me,” said Marcus.  “This is how I can uphold her memory, encourage other women to get regular checkups, work toward a cure and make a difference.  It’s not about just one person but about everyone affected by this disease.”

This year, Marcus participated in the 15th Annual Komen NC Triangle Race for the Cure
on June 11, 2011 in Raleigh.  Anna Marie, expecting their first child, was cheering from the sidelines. Last year. Marcus and Anna Marie celebrated their wedding anniversary by participating in the race.  In fact, the only year they both missed the annual event was on their actual wedding day.

This year the fundraising efforts are bigger and better than ever before.

“Last year, Jersey Mike’s Raleigh Coop funded the race,” said Marcus, who described his involvement as a mission.  “This year, Jersey Mike’s on a national level has created a six-month fundraiser running from May to October.  We will raise a lot of money and know the Raleigh Susan G. Komen Affiliate will put the funds to good use.”

You may have seen Marcus at this year’s race – he grew his hair out and dyed the tips pink in honor of his aunt. 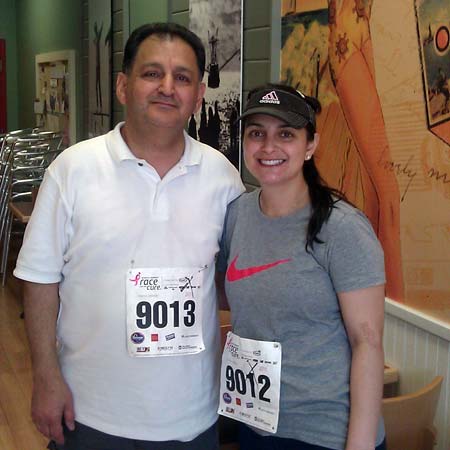 Neda Rousselot, manager of Jersey Mike’s Midtown Atlanta restaurant, is fighting to end breast cancer.  To make a difference, Neda is participating in not just one, but two, Susan G. Komen for the Cure® events in 2011, expecting to raise thousands of dollars to help find a cure.

The first, the Komen Greater Atlanta Race for the Cure (5K) was held on Mother’s Day.  Neda’s dad, Tony Saraj, a Jersey Mike’s franchisee, joined her for his first race.

Now Neda, 32, is focused on another 3-day Susan G. Komen Race for the Cure event – this one in November in San Diego (her first in that city).

Neda, who says the 3-day event is “the most amazing experience in the world,” expects to raise $12,000 in 2011 alone.  Net proceeds are invested in breast cancer research and community programs.

“I am so proud of Neda -- she is not just doing this for her mother, but for everyone.  At Jersey Mike’s, it’s not just about the bottom line, it is about here,” said her father, Tony, pointing to his heart.

It’s personal stories like this that inspired Jersey Mike’s Subs to launch, “Mike’s Way to a Cure®,” a six-month national initiative to raise awareness and funds for Susan G. Komen for the Cure.

“I am thrilled that Jersey Mike’s is involved and believe we can raise more than $1 million nationwide to help end breast cancer,” said Neda.

Both individual and corporate campaigns work toward ending a disease that threatens 1 out of 8 women in the U.S. each year.

“I will walk again this year for my beautiful mother,“ said Neda who is actively fundraising for her upcoming walks.  “I will walk until we have a cure.”