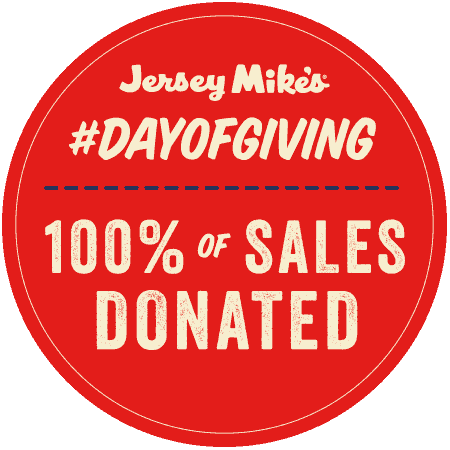 This year, the national sub shop chain is joining forces with more than 180 local charities for the company’s 6th Annual March “Month of Giving” fundraising campaign. Last year’s Month of Giving raised more than $3 million for more than 150 different charities nationwide and this year Jersey Mike’s hopes to raise even more.

During the month of March, all are invited to come into their local Jersey Mike’s restaurant and make a donation to that location’s designated charity partner. Charities include hospitals, youth organizations, food banks and more.

The campaign will culminate in the nationwide event, Jersey Mike’s “Day of Giving” on Wednesday, March 30 when 100 percent of the day’s sales – every single dollar – is donated to the local partner charity. For a list of participating restaurants and for more information on charity partners, please visit jerseymikes.com/mog.

“I would like to extend a personal invitation to come in and enjoy a Jersey Mike’s sub during our Month of Giving,” said Peter Cancro, Jersey Mike’s founder and CEO, who started the company when he was only 17 years old.  “This year, as we celebrate 60 years in business, we hope to raise more than $3.5 million to help local charities. It’s gratifying to know that each new location brings more opportunities to make a difference in people’s lives.”

Jersey Mike’s has more than doubled in size in just three years. Last year, Jersey Mike’s opened 197 new locations and exceeded the 1,000-unit mark. Started in 1956, the sub chain now has more than 1,500 restaurants open and under development nationwide.

“Giving…making a difference in someone’s life” has been the mission of Jersey Mike’s from the beginning. Since 2010, Jersey Mike’s locations throughout the country have raised more than $14 million for worthy local charities and have distributed more than 1.5 million free sub sandwiches to help numerous causes.